Okay, so we’ll start with the finished comic pages and pick up after with some thoughts on the making of it. 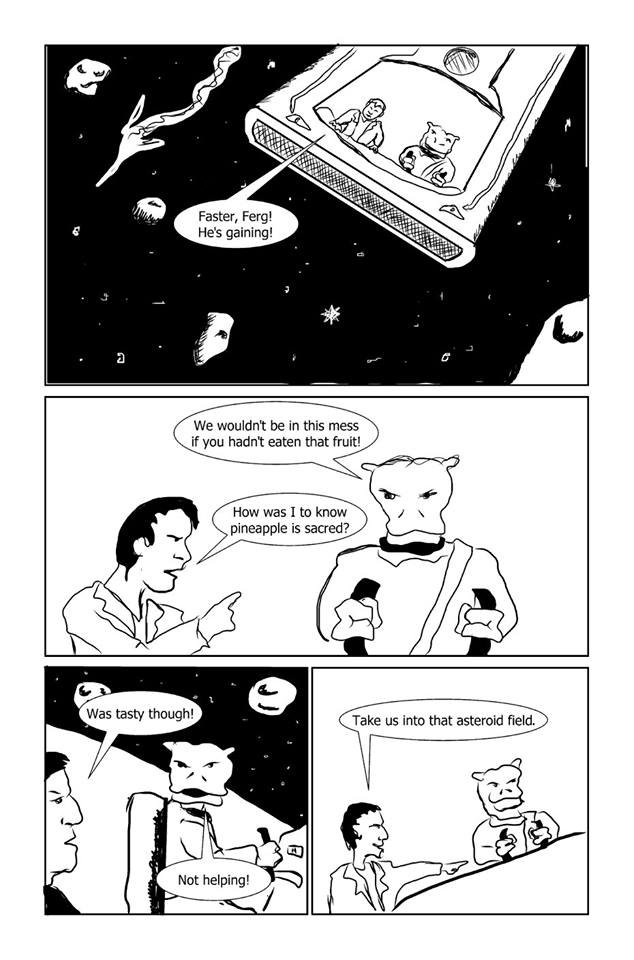 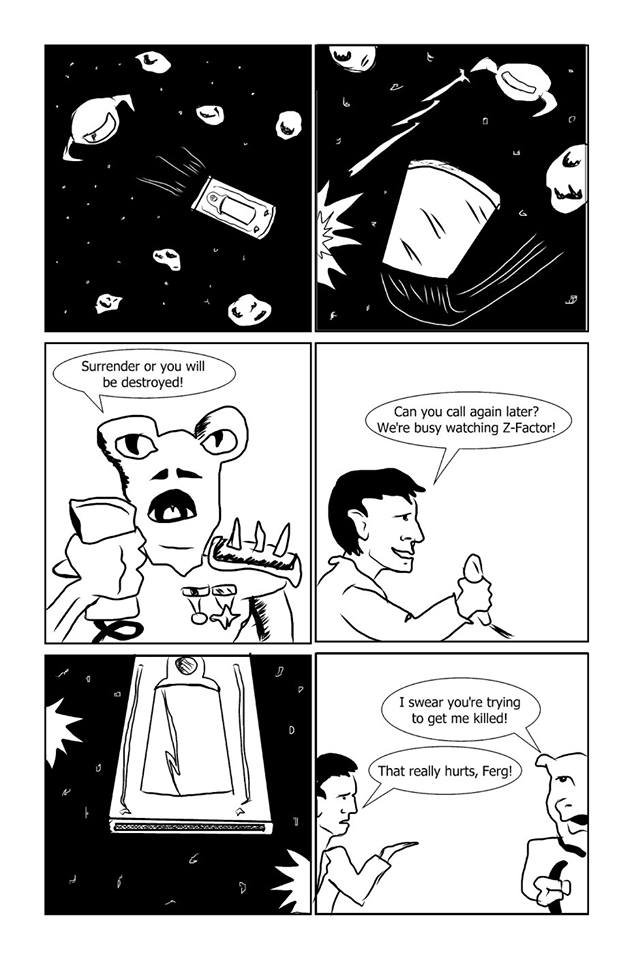 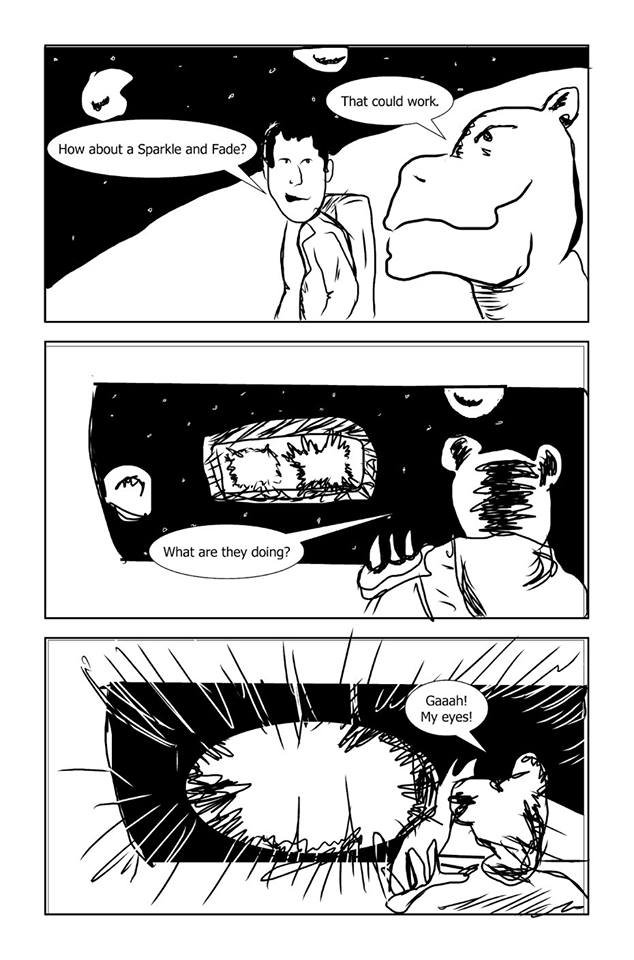 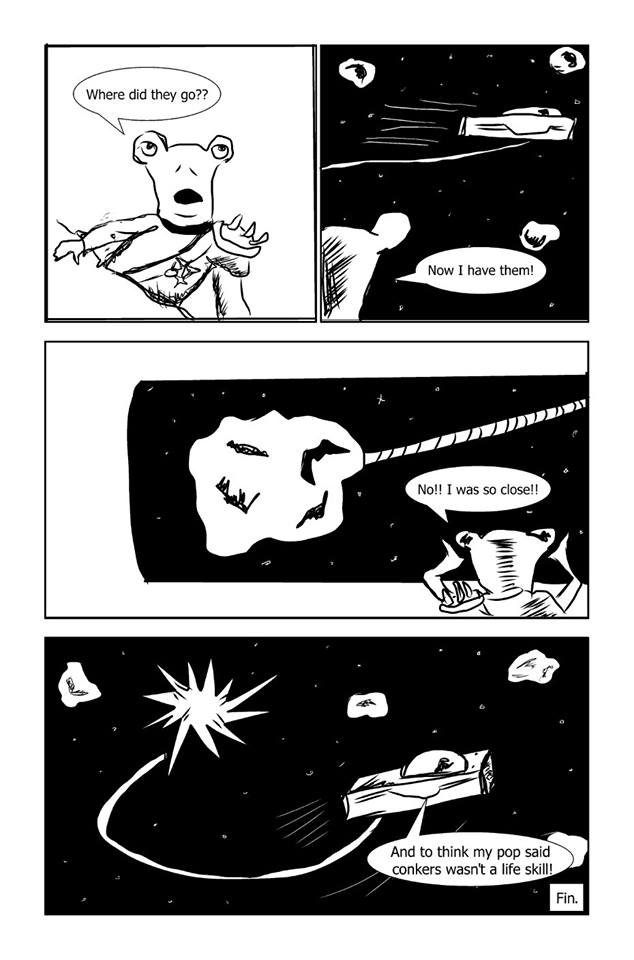 Welcome back! So that was ‘Odie and Ferg’. It’s the first comic I’ve completed in the best part of twenty years. And it could have another while yet before I finished one if Matt Garvey hadn’t posted his competition over on the Millarworld forums.

He posted a competition open to people who had long wanted to make a comic but had gotten round to it for whatever reason. The only rule for participants was that all involved in making a comic couldn’t have made a comic before be it a physical comic or webcomic. After that, Garvey outlined the spec for the submissions. At the basic level, it had to be a 4-page funny sci-fi comic. Solo creators could make the comic or a writer, artist, colourist and letterer could team up (once they were all newbies!).

It was exactly the sort of thing I needed to get making. I had a spec, a deadline and potentially an opportunity to see the comic in printed form. The fact it was all going to be newbies was an added incentive as it would be less intimidating to submit as it’s my first comic. That said, I did keep away from the submission thread until I was posting my comic as I still expected the comics to be of a higher standard than my own offering.

So, then came the actual making of the comic. The main characters were easy sorted. I knew instantly that it was going to be a duo. It’s a 4-pager so it necessitated getting the characters introduced quickly. The need for the strip to be funny was also a factor. A duo allows me play to the comedy writing that I can work best with, i.e. a ‘straight man’ and a smart-ass. I’d a pretty good sense of the duo before writing anything down so it meant I was pretty comfortable with their respective personalities.

The next bit of fun came from figuring out what works within the four pages without having the comic suffer due to unnecessary story or details. Initially, the story was going to be Odie and Ferg appearing in a ‘space gladiator royal rumble’. It didn’t take long to realise that 1) the idea was too much to pull off in four pages and 2) I didn’t have time to draw a large cast of characters. So a pin was stuck in that idea for now. Then the idea for the strip I actually produced appeared. The last page was the starting idea and I worked back from there. All I needed was a reason for the pursuit. Given that it was to be a funny comic, I slotted the idea of it being down to Odie eating the wrong pineapple.

Happy that I’d figured out the story and most of the dialogue, I moved to the arting. After the first day of drawing a tweet I’d seen had come to mind about drawing comics. Paraphrasing here, but it was something along the lines of, “pin ups are all well and good, but you need to draw sequentials!”. That was a hard lesson to learn. I’d started drawing regularly over the last two years and was pretty happy with the results. But as you have no doubt figured out from the quote, I’d mainly focussed on pinp-up/ one-off pieces. I’d given feck all time to sequentials.

This was one of the most frustrating parts of the comic making, the realisation that your ‘base level’ art is nowhere near the level you think it is. The one saving grace was that due to following lots of comic art folk, I’d been made aware that spending time on thumbnails could save you heartache and wasted time later. That said it was still had to swallow how I had to draw the comic if I wanted a consistent visual across all four pages. I wanted to keep reference photo use to a minimum (though there still is some there) for the sake of consistency and to establish where the art levels were at.

The next thing to push through was getting all the pages done even though the end product doesn’t match the comic in your mind. Though from what I later read, this is a problem for creators at all levels of comic making. But I have to say, even though the art is rough as houses, it still felt great to have the four pages finished and to be able to scan through them to see how the panels work for a reader. This is where the time spent on thumbnails had really paid off. I had an idea of what I wanted and I was pretty happy that I got as close as my abilities would allow.

Regarding the lettering, all I’ll say is that I apologise to any letterers who saw the comic. Placement wise they’re not too bad but how the text is positioned within some of the bubbles is pretty bad on review. Single lines where it should have been multiple lines with fewer words on each. But hey, I learned that much if nothing else regarding lettering!

In the aftermath of making the comic for the competition, I’d say to anyone putting off getting a start on their comic making to just get started. You’ll certainly find no better way to discover what you need to work on. And even when you’re starting out, you can still get the comic close to what you intended. I just put in silly plot and dialogue that made me laugh. Some of the jokes landed with some of the people that read the comic. Which is nice when you’re apprehensive about putting the comic out into the wild. Another weird (but nice) side-effect was wanting to get onto the ‘next thing’ so that ‘Odie and Ferg’ isn’t where my comic making peaks. I want to push things on to show that the writing and drawing can get stronger from lessons learned on the comic I made.

I like Odie and Ferg, they make me smile and they deserve better strips that will come with time and work. It’s kinda exciting to have characters of my own that are recent creations. Really looking forward to seeing what they get up to next and what other characters start to make themselves known.

So if you’ve been putting off making your comics, I say just make a start. Find your ‘Odie and Ferg’. Make something that only you can make! And have fun with it!

This entry was posted in Comics and tagged Comics. Bookmark the permalink.