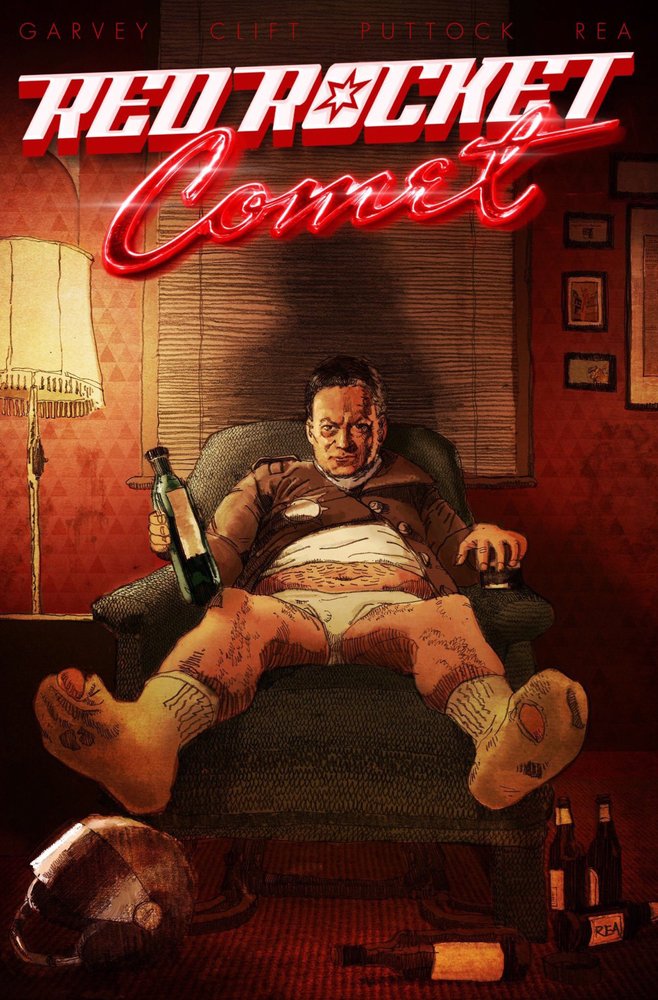 The glory days of Red Rocket Comets (Jerry Saviour to his neighbours) crime-fighting career is well and truly behind him. It’s evident from the run-down apartment he lives in that heroism didn’t pay well. The story opens with an unexpected visitor from his superhero days, his nemesis who goes by the title of Dark Skull (aka Lloyd).

The comic splits itself in two, the scene that’s unfolding in the present day in Jerry’s apartment and a flashback sequence to when Red Rocket Comet and Dark Skull met in their prime.

The art is split between Puttock and Clift, who each handle a different strand of the story. This gives the present day a grim and gritty appearance that is lacking the energy that is immediately apparent on the flashback pages. Lloyd has called to Jerry to revisit the events of their last battle, which is what unfolds in the flashback sequences.

Red Rocket Comet at times did have a Watchmen/ Black Hammer vibe to it due to the nature of both the present day story and the flashback sequences. The twist in the story was well done, particularly when you re-read the comic and see the clues that were peppered throughout the pages leading up to it.

The story also touches upon the strange relationship that comes from a hero and villain having repeated encounters over the course of their respective careers. It’s a similar to that of the police and career criminals where some form of relationship is inevitable as they each pick up details about each other over the years.

The difference in the two art styles makes for quite the contrast which works in the favour of the overall story. It’s as though two comics from different eras of the superhero comics genre were slammed together to make Red Rocket Comet.

Overall, the comic really worked for me. I liked how the story played out and that it still managed to have some surprises thrown in. I also liked how two styles of art were used to delineate between present day and flashback sequences.

It’s a small press comic that is certainly worth checking out.

This entry was posted in Comics and tagged Comics, Red Rocket Comet. Bookmark the permalink.